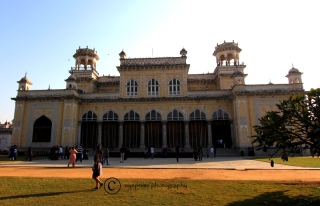 Often skipped by tourist in favour of its more popular cousin the Faluknama palace, the Chowmahalla palace which was built as a replica of the Shah’s palace in Tehran, Iran, was rumored to have surpassed the original in it’s grandeur.

Recipient of the prestigious UNESCO Asia Pacific Merit award for cultural heritage conservation in 2010, the Chowmahalla Palace whose restoration are still going on, is one of the must to visit tourist spot while you are in Hyderabad. 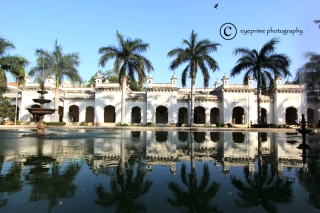 Though the older Southern part of the palace is still undergoing renovation but the Northern courtyard and “Khilwat Mubarak” which is open to public is enough to make you understand the splendor of the palace in it heydays with central fountain and pool and the adjoining greenery and buildings which were mirror image of each other.

The “Khilwat Mubarak” turned into a museum now, used to be the heart of the Palace where coronation of the Nizams used to happen and prestigious durbars of the Nizam used to be held here – the seat of the Asaf Jahi dynasty. The Durbar hall along with the aritificats of the museum – the arms and armaments section of th museum are one of the finest one can see in this part of the country. It brought me back the memories of arms I saw in the Rajput forts of Junagarh (Bikaner) and Mehrangarh (Jodhpur). 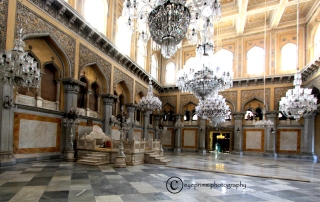 The Chandeliers of Belgian crystal in the durbar hall and the intrinsic stucco works on the ceiling and walls are another example of the grandeur of the palace.

I would love to be back to the Chowmahalla Palace when the Southern courtyard opens and I hope the palace administration can then go on to introduce a “Light and Sound” show to relive the days of the Nizams.

The palace has a small cafeteria just after the entrance serving tea, coffee, ice-creams, soft drinks and some basic snacks, however the eatery needs to have more chairs for guest and needs to kept more clean. There are toilets also which were quite clean when we went.

I visited Chowmahalla Palace with my family during December 2016.

Please feel free to get in touch for more details – rajib_deysarkar@yahoo.com