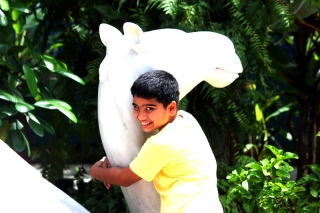 This is a narrative of the first six months of the tiny life form out in the world from the comforting dark and warm womb. A distress and agony overpowered me when the life inside me became an individual. I felt lonely. It was traumatic to survive without the usual movements inside me that had grown over the months.

But I survived and once and for all I accepted the fact. This part of me, that is the most beautiful one, is an independent entity now, and the onus to make him truly so, lies upon me.
All things start small, so did Raspy. At 8 weeks he was hardly the size of a raspberry so we named him “Raspy”. I was at home, relaxed and happy thus my pregnancy was smooth except for the sleepless nights due to Raspy’s vehement movements. I read many a good book, one extremely enchanting was “Gem in the Lotus”.
The D-day was tensed. Raji arrived in Bangalore early morning on the 6th of Feb 2007 from Kolkata and I had to be admitted to the hospital that very night. Raspy’s position suggested that he was due to eject normally by early morning next day. But all the drips and meds could not bring raspy out on his own so the doc had to operate and push and then I heard her say – cried instantly at birth, 3kgs, boy baby. 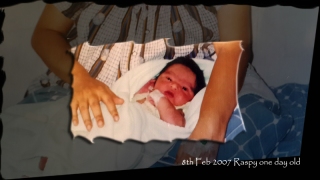 So 7th Feb 2007, 2:44pm our lives changed. Three days later we brought the little darling to our Bangalore home. The wait that started on the 16th of Jun 2006, the day we came to know of the little soul breathing inside me and the anxiety and tension accompanied with such news for 8 months was finally over.
Mom and Raji were the only two soldiers I had to fight the battle and they both did a tremendous job rising to the occasion beyond their physical capabilities. Mom at more than 50yrs of age took care of the household and the baby and me laughing all the way and beaming with joy, Raji too was most supportive and ever caring amidst his office that was quite hectic and leaves were not to be taken at will.

Raji always made sure that he could accompany me for the check-ups. He never let me out of home alone and took pains to bring home all the grocery required as and when even after a hectic day at office. We didn’t have Bigbasket back in those days. He had trouble picking up raspy as he had never handled a baby before but soon he learned and carried the little devil in his arms as we walked to the paediatrics chamber.

Mom had a terrible time motivating me to feed raspy, he was fed on only mother’s milk for 4 complete months. No water too as instructed by the doctor and the internet. If ever I had to go out for more than an hour I would keep my milk in a bottle as prescribed by the doctor.

Raspy used to get hungry almost every hour even though he would drink a huge amount at a go. I felt like a Holstein-Friesian Cattle with a huge production capacity. If it wasn’t for mom I would have switched him to formula milk within a month. She used to be awake almost 24hrs, on duty all day all night.

Raspy wanted to be on board a human always, preferably maa or me, he could not make out the difference except for when he was hungry, as he was guided more by smell. The general advice was to let him be and not to give in to his undue demands but both mom and I felt that its only for a short while that we would be capable of carrying him so why not indulge in our soft toy. I can’t carry him now even if I want to at times.

Many of my friends came to say chao to Raspy and showered him with love and gifts. One set gave him a gift that is his companion till date. Rakesh gave a book which I and mom read almost line by line and found ourselves in cognition of most of it although we could not follow it entirely. I would recommend it to every new parent – The Common Sense Book of Baby and Child Care by Dr. Benjamin Spoke. A few of my dearies can be seen here.

Well, the present companion is not exactly the one they gave but its sort of a clone that mom made. Simba as the soft toy is called was dragged along wherever Raspy’s little steps would take him and in 3 yrs it had been washed so many times that it turned into a course rag. The current one is called Nala. She became 5 last nov (2017).

The rented house at Bangalore was dark and stuffy so we had a lot of trouble drying clothes and keeping raspy and ourselves in good health yet we managed well. There was a lamp post beside the low wall of our compound and at night when all lights were out, Raspy who never slept at night for 3 months, would keep on staring at it. In the later months he developed a love for lighted places and was scared of the dark, he still is. 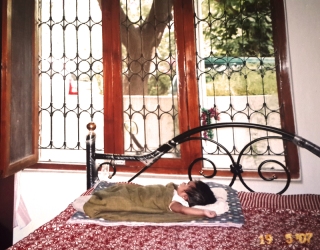 At about 3 and half months on the 26th of May 2007, we boarded a flight to Kolkata. The journey was smooth as raspy had no issues with flying and domstal worked well for me. Kolkata was hot and humid as ever but raspy was cool. He seemed happy with lots of fresh air and faces around. Mom too seemed at ease with helping hands that were lacking in Bangalore. I missed Raji and felt sad for him as he missed both me and Raspy.
Raji soon came to Kolkata for a week in June and again for two weeks in July. It would be long before he could drop in again so we celebrated raspy’s mukhebhaat (starting of solid food) on 23rd Jul 2007. 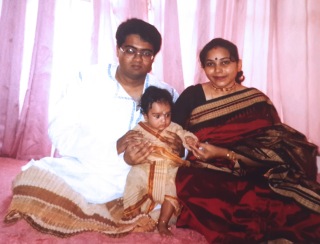 According to rituals my brother should feed the first solid food but since I have none of my own and lots of cousins on the contrary, dad did the honours.

From the 4th month onwards Raspy was given formula milk twice and mother’s milk 5-6 times. He was then switched to solids after his mukhebhaat and was mostly fed on formula milk, wheat cereal, rice, dal, potato, banana, apple and biscuit. This was accompanied by vitamin and iron drops. Raspy disliked the drops and would scream with the utmost opposition and turn purple in rage. He loved to eat and in bulk. We fed him according to schedule and also as he demanded. Mother’s milk continued till he was a year old but it slowly came down to twice a day. Interestingly the lesser I fed him the production also reduced. 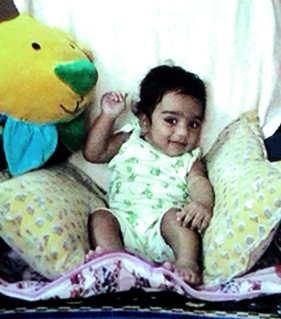 In the August of 2007, Raspy was no more a newborn. At 6 months, he could smile or make a face according to his wish, recognize and hold his bowl, spoon, tumbler and bottles. He could grip objects firmly and place them into his mouth, though he did it without any discretion, the object could be a garment, a leaf, one’s face or even an ant.

He could attain and sustain a crawling position for a few seconds and jump like a frog on all four, he could not crawl. He could bring himself to a 120° obtuse angle position that’s nearly a sitting posture.

Raspy was born with lots of hair on the skull and his entire body. It took some time for his complexion to stabilize, initially, he was pretty fair then darkened a bit again turned fairer, then he got my complexion which is fair enough for a boy at least to my liking. His physique was slender and well proportioned, with strong arms and legs. Most of the hair on his body has disappeared and he looked rather handsome with that heart-warming smile. 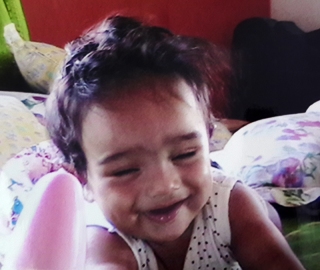 Characteristically Raspy was full of fun and vigour. He used to cycle his legs and throw his arms since birth and once he could roll, one moment he was at my side and next somewhere else. It was difficult to leave him on his own for even a few minutes and I used to tie him up if such a situation would arise.

He laughed aloud and screamed at high decibels when happy and excited which he was most of the time. He expressed annoyance at the top of his voice too. 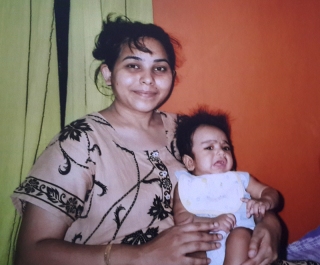 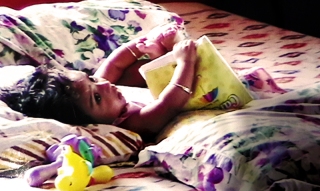 Raspy liked company and didn’t mind a lot of them till he was personally disturbed. When in trouble of being mobbed or irritated otherwise he would enact as though hungry or sleepy so that we can rescue him and if there was no way out he just fell asleep. This particular act of falling asleep in adverse situation he had been doing ever since he was 3 and half months. He loved to play on his own for a considerable amount of time.

Raspy loved to stay immersed in a tub. Mom had been bathing him ever since he was three days old and never wanted to come out of his little tub filled with lukewarm water. He liked the water that way not cold even when the climate was hot, a liking he holds on to, to this day. He liked his food hot too whether liquid fluid or solid.

He will be 11 yrs old tomorrow, and I’ll slowly fill you in with details and events and the extraordinary moments that have gone by in the subsequent blogs. This is for those who love Anoushrayan and want to know about him. Cheers.